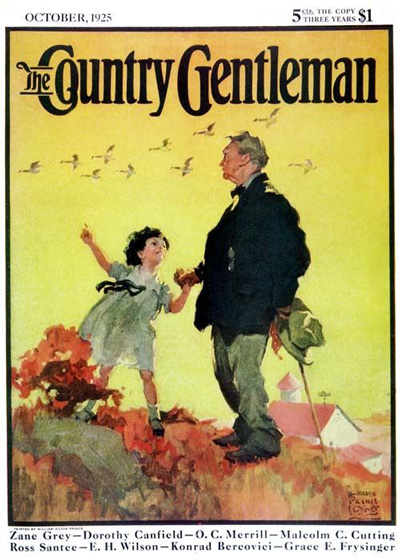 The Country Gentleman enjoyed “The Bandit”!

In September, after Bandit came out, McClurg forwarded Ed a letter from the prestigious agricultural magazine The Country Gentleman, owned by Curtis Publishing Company. Curtis had Ladies Home Journal and The Saturday Evening Post, magazines firmly in the “slick” category of the newsstand. Ed had long hoped to make a sale in that market, a lot more lucrative than the pulps. This could be his chance.

Editors H.C. Paxton and Loring A. Schuler had found Bandit “highly entertaining,” and wondered if ERB had another book on the way similar to it. They weren’t interested in his usual stories of Tarzan or other planets, it was only because of his “shift” to the Western-type tale that they were even considering a solicitation. Davis gave Ed so much trouble about Bandit that he probably wasn’t thinking about doing another Western right away, but a man’s got to make a living. He wrote back to Paxton telling him that he was “tying up” his next Western with the Geronimo campaign of the 1860s. In actual fact, he was still finishing up Master Mind of Mars, but he may have started looking for his old notes about the “Apache Tarzan.”

Twenty days later he wrote to Paxton again, intimating a possible theme. He said he would someday like to write a story about the southwest with a Mexican as the hero. He thought it might repair “our treatment of them in our fiction, where they are nearly always portrayed as heartless scoundrels,” This idea seems to come out of left field, but Ed might have been fishing to open the door on an even more controversial topic.

We don’t have any record of what Paxton and Loring thought of that idea, but seven months later, on June 8, 1926, Ed wrote that he had found a new direction for his story. Pitching them almost exactly as he had Davis in 1919, he saw “the possibility of a romantic character that might be likened to an Apache Tarzan.” He told them this kind of story would have to be “written from the viewpoint of the Apache,” but he wouldn’t start anything until the idea was approved and a price agreed on.

Paxton and Schuler replied saying there was “abundant foundation for a Tarzan of the Apaches kind of book,” but they wanted him to “hold far closer to the probabilities” than he had with Tarzan. They also offered him “not less that $5,000 [a bit more than $70,000 in 2019 money] — more if the quality of the tale warranted a better price.” Ed was so anxious to accept this offer, and get into the slick market, that he even accepted the Curtis contract conditions that they buy all story rights and some rights would only be returned to him after publication. 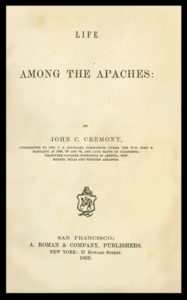 On August 19, 1926, eleven months after the initial inquiry, Burroughs started writing what was then called The War Chief of the Apaches. He was serious about this novel. He had something to say and he wanted to say it as clearly as possible. The story would be told from the Apache point of view with all the actions completely rationalized in the way the Indians saw their lives, their loves and their angers. Everything these characters did was to be invested with their own morality as closely as he could convey it through his research. He bought every book on the subject of Apache life that he could find, and read and re-read them. Some of these books like Cremony’s Life Among the Apaches (1868); Bourke’s Medicine Men of the Apaches (1887); Geronimo’s Story of His Life (1906); and Wood’s Lives of Famous Indian Chiefs (1906), are still read and consulted. 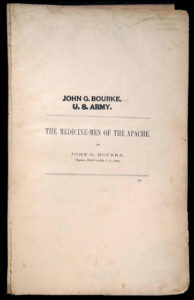 Ed took as much as he could from the books. He used the Apache words he found, he highlighted the rituals and religion of the Apache warrior that he noted in Bourke, and he was very sure to remind his readers about why the Apache was so violent and persistent in defending his land. He wasn’t shy about emphasizing the differences between the craft-wise and self-reliant Native Americans, and the settlers and military who took every advantage to obliterate the tribes by rounding them up and taking away their freedom. Burroughs was never fond of the slow but inevitable march of “manifest destiny.” The natives had everything over the army when it came to strategy and ferociousness, they just didn’t have the fire-power.

“…Do not forget that he was only a savage, primitive Apache Indian. Make allowances for him. Had he had the cultural advantages of the gorgeous generals of civilization he might have found the means to unloose a poison gas that would have destroyed half the population of Sonora.” 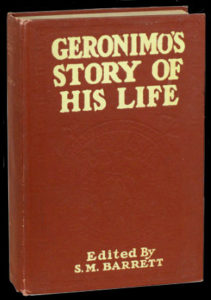 Before the story was finalized, Ed wrote to Paxton on November 2, saying that he had “adhered very closely to the facts,” and not given his imagination free rein. His first goal was to be entertaining and the novel was “in no sense an historical novel” because the timeline was “more or less mixed.” However, nearly every incident, battle, or raid was taken from authentic accounts of the times. He also claimed that there were so many contradictions in the books, for the spelling of Apache names and terms, that he was compelled to “take considerable license.” He assured the editors that he was not using any personal knowledge of the Apaches because his experiences had only given him an “extremely biased and one-sided impression [knowing] them then from the soldier’s and white man’s point of view… .” 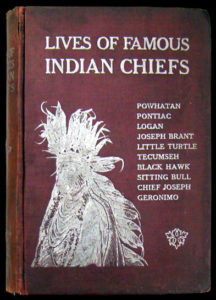 Ten days later, the manuscript was sent off to the The Country Gentleman. Ed waited three weeks for a reply.

On December 3, Paxton and Schuler sent a letter rejecting The War Chief of the Apaches. They said, among other things, “[it’s] not quite the serial we should offer our readers.” Strangely vague, the letter also went on to say the story would have “a distinct appeal for many readers …” implying, just not theirs. One of the oddest phrases was about the problem of choosing what kind of story they should run:“[it] is a matter for prayerful thought.”

Ed was not going to let it go. He wrote back December 13 asking about the weaknesses in the story, hoping to fix them. Maybe the details of the Apache training of the white boy, now named Shoz-Dijiji, had been too repellant: “…I was anxious, probably over-anxious, to develop the reader’s understanding of the training and environment of Apaches from childhood to the end that some of their cruel and inhuman practices might not make them wholly abhorrent in his eyes.” Were the white characters “too crude”? He explained that he had known pioneer types from the 1870s and 80s, during his time out west, and found them “…almost universally ignorant, uncouth and unclean…” though some also had “sterling characteristics.” Was he too hard on the whites?

On December 28 Paxton wrote back with more pointed reasons for the rejection. He conceded that the white man’s treatment of the Indians was “one of the most shameful chapters in American history,” but he thought that the average American reader still held the view that Apaches were “a savage and heartless marauder.” Though admitting that ERB’s novel could have “genuine literary and historic value,” he insisted that “… the most effective use of savage peoples in fiction is where the red or brown or black man is shown as the staunchly loyal follower of the white leader, and where there is the opportunity for the striking contrast between characters of different races.” What The Country Gentleman wanted was the same old, “white-washed,” well-tamed and well-behaved Indian. The magazine had no intention of printing any story that told, or came so close to, the reality of Native and White relations during the 1860s and 70s.

Burroughs told them before starting what kind of story he was going to write. He did his homework, researching the times more than he had done for any other novel. His hours of study and his sympathetic view of the Apache had created a story that was anathema to the conservative, farm-bound readers of the agricultural audience. The western romances of Zane Grey and the “good dog” sentimentality of Albert Payson Terhune, were the meat and potatoes of The Country Gentleman magazine. The kind of controversy that The War Chief of the Apaches might bring to their pages was a definite “no.”

If we’re brutally honest, we have to acknowledge that had Burroughs taken the time to actually look at the magazine he would have known that the story he wanted to tell would never fly there. Any magazine that preferred spunky puppies, “Sweet 16s,” glowing young men and preachy oldsters on the cover, would never go for a realistic novel about the life of a young white boy, raised as an Apache to hate white settlers.

Luckily, ERB could fall back on Argosy All-Story and A.C. McClurg & Co. But the path to get the story published was not going to be so easy there either. Ed was still in for a fight.

I hope you liked this post, even if you didn't, please leave a comment and let's start a conversation. Cancel reply